» where to get upholstery kits

Yesterday at 9:10 am by gwistrup

I wanted to share my mistake that is fine now, but anyone can learn from my error.

Issue:  I found a puddle of fluid near the front driver's side area and determined it was brake fluid.  Confused since everything is new to include the brakes, I started searching.  I found the brake system reservoir had leaked from the nipple that normally feeds the clutch master.  My clutch master ended up having it's own separate reservoir, so I put a rubber cap on the brake master reservoir nipple and secured it.  The rubber nipple had split and leaked after being on there for about a month.  I realized that I made the error by not using the right rubber or brake fluid rubber hose so this split was my fault.  Ok, now what?  I had to clean it up and I fixed it with the correct brake fluid rubber line with a plug.

I figured I would start the car and let the residual brake fluid smoke off of the headers.  Well that was stupid since some of the brake fluid had lightly puddled where the headers merge.  As it got hot enough, the smoke became a fire the size of my fist and my fire extinguisher was on hand to put that out with two short squirts.  I felt really stupid that I did not rinse all of this off before heating up the engine which only has 30 miles on it.

I realize now that since there are headers under the brake reservoirs with this new engine.  Originally this car had the headers on the other side along with a metal separation piece for the brake master from the engine.  So here is my question and request for discussion please.  Is there a solution out there to keep this from happening again keeping brake fluid away from hot headers that are located right below all of these lines.  Even the ability to keep more heat away from the brake lines would be a plus.  Has anyone addressed this in their build?  Anyone have this same problem?  All discussions are appreciated.

I am happy this happened in my garage and not while out on the road.  It make a great case for keeping a small extinguisher in your car. 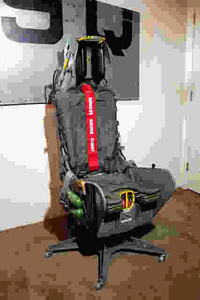 most people dont realise how flammable brake fluid really is. ive seen several fires caused by brake fluid. its good you had an extinguisher on hand and got it under control quickly, just another case for why its important to have an extinguisher in the car.

i cant really comment on how to address the heat issue as i dont have a v8 swapped car, however it would be wise to have an aluminum heat shield between the master cylinder/brake lines and the header to protect the braking system from absorbing the heat, as well as deflecting any possible leaks away from the exhaust.

Yikes! Scary story and glad all's well. I have an extinguisher in the car and another hung on the garage wall. Good precautions I've not had to use. A Buddy I'm helping these days has done a full-on fire suppression system in his car with nozzles pointed at each header and each seat. Thinking about doing the same.

Maybe you could post what that fire suppression system is or how it works out with installation. I have seen in the old days the halon systems that point directly to the fire from the broken plastic line that is across the engine. Anything you can post with pictures would be great. I am all about protecting my investment.