Yesterday at 4:13 pm by Rikstone

So, how do I get rid of the spacers he has currently on the car but get the correct track width. It has 911 wheels, not sure of the width or off-set, but I can get that info if it helps.

Here's a pic of a front wheel if it helps.[img] 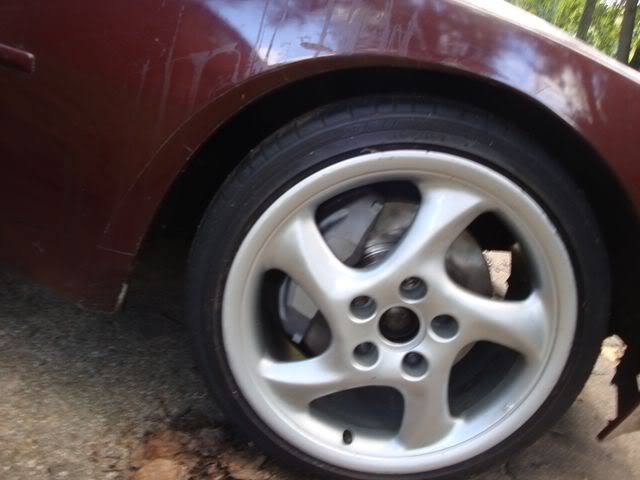 Confusing I know. Another way to explain this...

The offset is the difference from the centerline of the wheel (which is midpoint between the outer rim surface and inner rim surface) to the inside mounting pad of the wheel where it meets and bolts to the hub.

Late 944 ('87 and newer) wheels have something around 52 to 55mm positive offset. Meaning the inside mounting pad of the wheel where it bolts to the hub has been moved, and is now slightly more than 1" further from the centerline. Positive offset rims are supposable stronger than negative offsets...so I've read.

Look closely for numbers near the valve...often you may see something like 55 cast on the wheel, meaning the offset is 55mm.

A simple 1" spacer keeps the wheel track about the same when using the wheels with a larger offset from a newer 944 or other Porsche models.  If no rear spacer was used, the inboard side of the tire could easily rub against the trunk area's sheet metal in the wheel well.

Or you could swap out the early rear suspension/axles to the late (and wider) 944 and not use rear spacers.

btw...if you were to have your rims widened by 4", (say from 7" to 11") they would probably add the 4" to the inboard side of the Porsche rims. In this example you would need to add 2" spacers to keep the wheel's centerline in the same place.

Thanks guys, I get it now. The rear suspension is different from early to late then? I was talking to a guy who races these and he said the suspension was the same from beginning of production, to the end, and only the wheel offset was different.
I'm going to pick up late model rear suspension, I don't want spacers. Do I?

DrBoost wrote:...said the suspension was the same from beginning of production, to the end, and only the wheel offset was different.

Well not exactly. Yes, the offset is different...but some of the other components are different (longer/wider) as well, to make up for the offset change.

I'll let others opine on what they think about spacers...I know Porsche uses them...but they are less than 1".  I also know you NEED steel lug bolts & nuts. Just use a magnet to check. But if you swap to a 'late' rear end...you are correct, you will not need spaces.

If you do change out the back end, I would go with a late turbo..like an '89 or any 944S2 as they use the 25 spline axle/CV joints (verses 33 spline) of which I believe many of the component parts are stronger. Yeah, some '88 turbos have the 25 spline, but it's just like any other Porsche mid-year change, ya never know. Also the 968 uses the 25 spline half-shafts etc., but the axles/half-shafts may be different lengths...dunno.