Up to last month, I had been satisfied with my the brakes on my race car. I'm running TurboS brakes in front, and turbo rears (hawk DTC 70f/60r). At Barber motorsports where I usually run, I even removed my brake cooling ducts as they were not needed.

Last month I go to NOLA and after 13 laps I completely lose my brakes. After bleeding they are fine. Temperature indicating paint showed the rotors (measured on the veins) to be >1400oF, and caliper temps over 600oF.

After that event, I replaced brake ducts and have added titanium backer plates.

Last week I head over to Road Atlanta. Brakes work well at the start of each session but begin getting spongy by the end. Rotor veins still reaching temps of >1400 degrees, calipers were less than 600 but I need to get a better system for measuring than the paint (will order Alcon temperature strips).

So, I'm trying to determine my problem. I was thinking that I might have a stuck caliper but after testing I don't think so. I'm going to replace the piston seals as they are likely original, so it won't hurt to do them.

I'll be at Barber the middle of November racing. If I have problems there, then I know there is a problem. If not, then I have an issue with brakes on hard braking tracks such as NOLA and RA. If so, I will need to think about the best upgrade.

You are using the DMC setup, aren't you? I don't know about what is normal for caliper/rotor temps but my DMC needed some heat shielding. The pedal would be spongy when I got back into the car when it sat for an hour or so after a drive. Your car may get some heat soak into the MC's while running with the extreme temps at the track.

Well that sucks. Nothing spoils driver confidence like brake problems. I'll throw some other ideas out there but can't say I've had this problem. Are the rotors getting slim? Less meat gives less heat capacity. I assume you haven't changed fluid and are using a good one. You were changing hubs around a while back, might the bearings be too tight? I think you used an aftermarket bearing, maybe they're not quite right and putting heat into the hub & rotor.

Heat shield the MC's, get some Wilwood Integras on a 13" rotor and never look back... 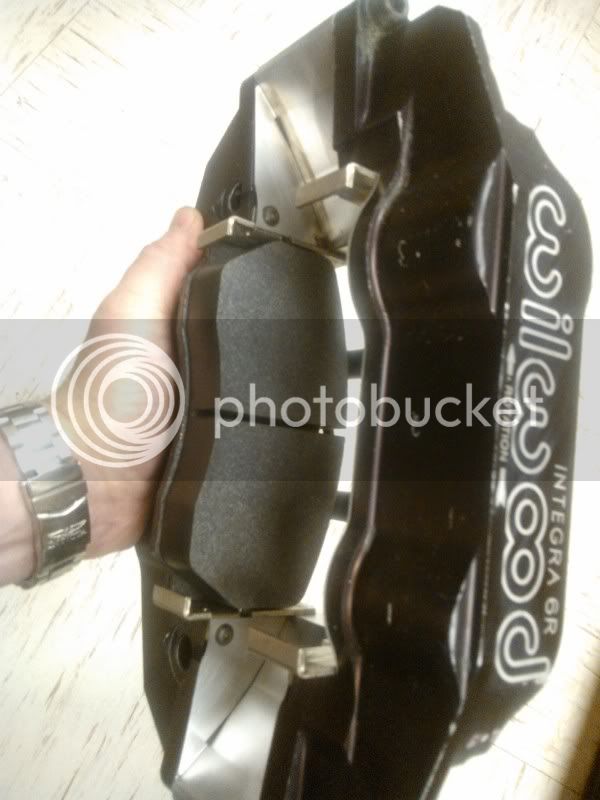 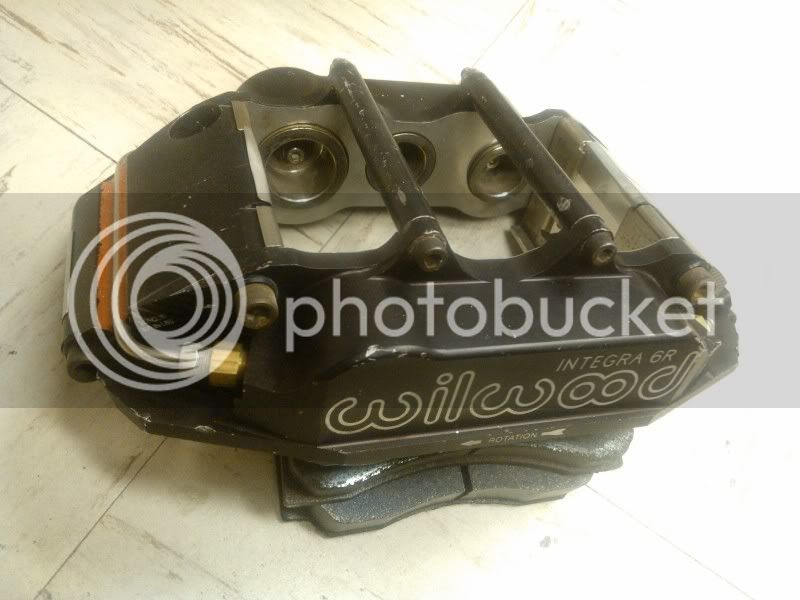 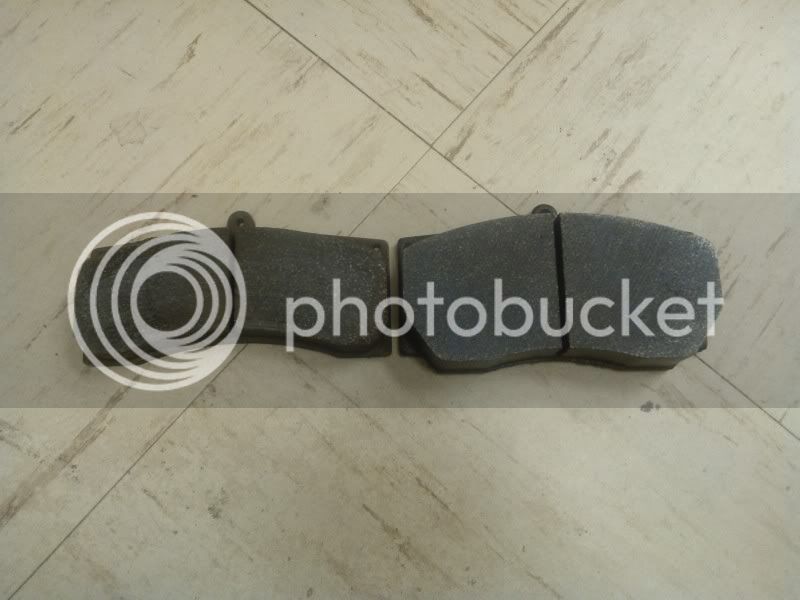 All good suggestions. I do have a heat shield around the DMC already, but could put a small air duct to it fairly easily. I don't think it's the bearings as the rotor hat is not getting hot, in fact there is no change in paint color (temp indicating paint) of the hat. And yes Rob, I was looking at your thread on those and was going to contact you about the adapters. Will those fit in a 17" wheel?

Tim I am suggesting these as I was brought a pair last year to mock-up on a local 951 track car. I had done a few different adapters for various calipers over the years for this particular car and he said these are the track kings.
And yes they fit under 17"s with a 330mm rotor. I have a set that I will mount on my 928 when I get a bigger set of wheels. Right now I have 993 16" and these calipers barely fit with the 318mm BoxsterS rotors and 1/2" wheels spacers.

Those are massive! How's the pad selection? That's the nice thing about Big Reds is that pretty much ever pad is made for them.

These replaced a set of Big Reds. He said his overheating issues are a thing of the past. The Therm-lock pistons are key along with the 1.1" thick pads lol.

I made a simple adapter with barrels to fit the 180mm radial span on them for the 951 spindle, but wondered if the factory wilwood adapter could be modded to fit the 87 NA spindle.

Yea, those pads are as thick as what you find on good Alcons. I looked at pads, and the Polymatrix is available as well as PFC. There's a cross reference for hawks, but when I search the numbers, nothing comes up.

IIRC I have a set of the hawk pads for them, just don't recall if it's the deeper sweep pads that I have are brand new. I will build adapters for them to fit 87-up NA spindles and Cayenne 13" rotors. His adapter was one-off as he had a Wilwood 13" 2-piece rotor with shorter off-set.

Oh $#**, just bought a set of used integras off of evilbay

Found a good deal on a set of polymatrix A pads on evilbay as well.  Hawk pad sizing is http://www.raceshopper.com/brake_pads/hawk/hb221u1.10.shtml

Hey Tim. I'm at shop today and need you to confirm a dimension on your Turbo spindle and hub when bolted up. I assume you have a spare set of 87-up 951 spindles?

Never had an issue with my Big Reds and 964 turbo rotors. Ran the entire season on the same fluid even...

Tim pm your # again my inbox got dumped.
I need the distance from hub face to caliper/spindle interface. On the NA hub/spindle it is 3.450"
The deep Integra pads match the Cayenne rotors perfectly at 62mm depth. So I won't even bother with a 2 piece rotor on mine.

Pic below to see if this is what you need.

Mind posting a pic of the MC heat shield? Thanks. I wrapped mine in heat reflecting fabric but it still gets some heat soak when it sits after driving, but much better than it was.

Arthropraxis wrote:Mind posting a pic of the MC heat shield? Thanks. I wrapped mine in heat reflecting fabric but it still gets some heat soak when it sits after driving, but much better than it was.

Alum heat shield between headers and bottom of the MC's.

Thanks. Mine are over and under so the bottom one is closer to the headers.

Everything is ordered. Will not attempt to make the conversion for my race at Barber in less than 2 weeks, but instead will shoot for installing and dialing it in at the PCA DE at Barber in December. I'll report back then.

I will be using Stoptech powerslot rotors and Polymatrix A pads to start with.

The pads came in today, damn things are massive

Rich L. wrote:Those are massive! How's the pad selection? That's the nice thing about Big Reds is that pretty much ever pad is made for them.

I have that exact same ruler.

Calipers arrived today and I'm shocked. Based on the photo on page 1, as well as the size of the pad, I was expecting humongous calipers. Turns out that they are roughly the size of the turbo s, not quit as thick but slightly wider to accommodate the thick pads. Calipers are on the truck for delivery.

Similar topics
» Outdoor Showers and other Gray Water issues
» Is anyone else having issues with flies and gnats??
» Spacing Issues..
» motor home brake job
» magaluf issues