Yesterday at 10:40 am by cruisedirector

I've been through a number of different cars in the last few years. Each one had its own strong points but I couldn't get over something so it had to go...

Past:
1991 Nissan Skyline
Difficult to order parts. Too plain inside but rear wheel drive and very fun for a few years. Not too modified.
[You must be registered and logged in to see this image.]

1991 BMW 850i
Expensive to maintain, too heavy, and poor gearing
[You must be registered and logged in to see this image.]

2008 Subaru STI
Finicky to upgrade but best vehicle I've owned yet. Kept it for 5 years before it was time to move on. Modified a bit and the fastest car I have owned.
[You must be registered and logged in to see this image.]

Current:
I've been lurking on the forum for a while but I recently purchased an 1988 944S with an LT1 swap. The car has been through a number of owners in the last few years including Gamman on this forum.

But soon found out one of the rear wheels was cracked so I picked up these:

So far I'm still working through maintenance items for the car because I have a list of annoying problems.

Need to be fixed:
-Sunroof gears stripped (fixed and re-stripped, limit switch on sunroof motor needs replacing)
-Tach reads 25% too high (which works all right because 7500 RPM on the tach would be approximately the same as my 5700 RPM redline for the LT1)
-Speedo reads 11 km/h too high (Now reads 5 km/h too high after installing 255/45-17 in the rear to help with gearing)
-Gearing is an issue with the stock 944s non/LSD tranny 3.889 final drive (I have a 951 non/LSD tranny w/cooler with the 3.375 final drive waiting for an improved 5th gear before install)
-Sticky throttle. It seems hover around 2000 RPM indicated when I clutch in while cruising and rolling to a stop. The exact RMP varies and is easily reset with a throttle blip. Not sure if its the throttle cable or the throttle body that is sticking.
-One of my fans sounds like its dying (I think). It makes a whinning noise when I brake (manual brakes, power steering). I thought it was low fluid but I topped it up and the noise is still present. Also the noise is still present after I turn the car off (hot) and stays until the second fan turns off. The low temp fan sounds great.

The open differential is certainly noticeable, but for now it's a street car so it reminds me to slow down if the tire(s) are breaking loose...

This forum has been a great resource already and I look forward to tapping in to the knowledge on here.

Glad to have you aboard!

Welcome! I've driven 3 out of 4 of your cars, I have to agree that Suburu is fun, and fast! Looks like a good platform, looking forward to see what you do with it.

Looks like my sticky throttle was the result of a corroded throttle body spring. Hopefully I can clean that up and it'll return to normal...

Hi Darren, thanks for posting about your car. We're in the same city, perhaps we can grab a beer and compare notes some day. I don't think I've seen your car around before, have you or PO had it out to TimeAttack at Stratotech? There's a lapping event at the new Castrol track next weekend, good chance to check out the track and your new car.

I'm just getting started on my swap. I have the shell mostly ready now, the engine is on a stand in the garage and I have a ton of stuff on order that I'm waiting on. 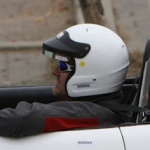 I'll send you a PM majormojo.

**Edit**
Disregard, I'm not allowed to send PM's yet. I'm on the south side if you want to meet up one day and I'd love to see your swap progress.

Spring time is around the corner!

Did a quick wax and polish before another round of snow hit...

I've been shopping around for a short(edit: tall not short) 5th gear set to add to my 951 trans before it's installed. I believe my 951 trans has been sitting for a few years now so I'll probably take it in for a re-fresh (and hopefully have the tall 5th installed if I find one) before swapping it into the car.

Picked up a brake booster from a 2000-something SVT mustang. Now to sort out all the fitting etc to get this hooked up for power brakes.

Finally pulled the trigger on the trans build and swap!

I have a local shop rebuilding my extra Turbo trans with an N/A 5th, new bearings throughout (original bearings showed signs of wear) and a wavetrac TBD diff. I'm looking forward to the longer gearing and especially the diff!