How can this happen??

How can this happen??

I was reading on 968forums about several 968 conversions that were done using LS1's without dropping the crossmember and the intake fits under the 968 hood which has less clearance than the 944. How does that work? 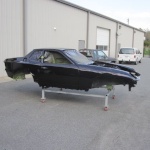 I think it does work because there is a little more room under the hood due to it is longer.

... I didn't think you HAD to drop the crossmember when installing an LS1 (on the 944)... I thought you had to for the LT1 because the intake is so much taller.....or put a bubble in your hood lol.

The 968's I don't know about.... so I can't answer your question, but if someone would answer yours, then mine should be answered too

If the 944 doesn't need the xmember dropped, I would think people would avoid touching it. I just got an LS1 longblock, but I'm probably a month away from a real test fit with the intake/throttlebody attached.

If it has to be dropped, I'm going to drop it the minimum distance to clear the hood, either way I'll be taking pictures and posting MY results for my 87 944 NA.

I don't know if you "have to" lower the cross member.

Mine is lowered. The RH kit comes with the setup to lower the entire assembly by about 1/2". And I use the setup.

I see no real issue with it and track testing has proved that it does not affect the handling of the car. Driving the car yields no clue that anything has changed.

And honestly, if you can lower the engine position relative to the car, then you lower the cg of the car on that end of the car, which is good.

The only negative would be the A arm position, which can easily be corrected the 1/2" by simply redrilling the A arm mount point on the cross member up by the same thickness of the the lowering spacer kit.

Then you need to drop down the tie rods the same amount with one of many of the 911 bump steer kits.

In the end... it's no big deal. People are making an issue out of nothing.

I track this car almost every week and I can tell you with 100% certainty, the the RH kit is all you need.


So, I know this still doesn't answer the question of "HAVING to lower the crossmember", but maybe you do???

The thing I worry about with lowering it is ground clearance. Most of you probably don't have this problem, but... I work construction. I have to drive on a ton of unpaved, unmaintained roads. The 944 at the stock height is as low as I want to go. I haven't ever bottomed out with it yet (sometimes I have to take "alternate routes" on construction sites, but I don't want to risk it. I would really like to keep my crossmember where its at.... if possible.

So for me, this question has a lot of importance, and I'd like to hear from someone who hasn't lowered it and had the LSx engine fit.

I believe its being lowered due to the master cylinder/cereal bowl to LS head/valve cover clearance.
_________________
[You must be registered and logged in to see this image.]

Correct me if I'm wrong, but IIRC, the LS/LM blocks are taller for one.
Also, I posted before and just recently had convo with Greg that the tolerances on this car vary, hence the Oktoberfest comments I make.

And most importantly. I have personally measured 4 different X-members and discovered that the Motor mounts bolt hole spreadwidths all varied by up to 0.5". The fact that these holes sit on an angle shines light on the fact that some people lower X-member by 1/2", some don't need to.
This is why I redesigned the motor mounts to be 3/8" shorter drop that the posted dimensions to allow for adjustability of them on the X-member.
I can get away with 1/2" x-member drop on mine, but lowered it 1.0" to get a lower Center of gravity than someone with an all alloy block, since mine is the iron Block.

The postings on 968forums regarding this subject by a poster who did a 968, discuss several attempts to fit the LS1 under the hood and above the crossmember before the correct balance was found. Based upon xschop's post above, I'm concluding that universal motor mounts dimensions may not be the answer to everyone's needs (depending on your level of OCD I guess). Is it better to use a shorter engine mount and shim it up rather than the crossmember down?

My nest question/concern would be the changes in the torque tube angle with moving the engine up or down to accommodate the hood-crossmember clearances. Is this an issue?

Your not really dropping the motor, technically what your doing is lifting the body. The motor's relation to the crossmember remains unchanged but the front end of the car is raised 1/2-3/4" which is why you need to use spacers on everything. 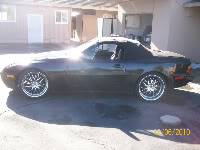 You are not dropping the motor, but raising the body: IF the xmember spacer matches the strut top to body spacers.

However you are lowering the motor and Center of Gravity if you space the Xmember and use lengthened ball joint pins and/or custom control arms and no strut top to body spacers.

My kit was from rh. It seemed to me the throttle body was gonna be very close to the hood. At one point I thought it wasn't gonna close. But it did. I think an idea to determine hood/ throttle body clearance would be to put a measured sized "meatball" Of "ductseal" on the throttlebody and close the hood. This would give us some kind of clearance measurement. Just an idea. Maybe I'll try it tomorrow. Kinda wonder myself.

How thick are your Xmember spacers?

Hopefully this wont make me sound like a total idiot but... Can a wedge adapter be installed between the manifold and the t body to point it down hill away from the hood?

) work. The motor doesn't really care where the throttle body is, as long as it is metered air. (throttle position). I don't know why more effort has not been put into some solution along these lines.

) work. The motor doesn't really care where the throttle body is, as long as it is metered air. (throttle position). I don't know why more effort has not been put into some solution along these lines.

If you moved t-body down wouldn't it interfere with the serpentine belt?

Who said it had to be moved down?

It could be move to any location (within reason) as long as you have smooth tubing directing your air flow.

Angled down... Someone mentioned added an angled adapter on the t-body.

Admin wrote:Who said it had to be moved down?

I could be move to any location (within reason) as long as you have smooth tubing directing your air flow.

Admin wrote:Who said it had to be moved down?

It could be move to any location (within reason) as long as you have smooth tubing directing your air flow.

I was trying to be funny, doesn't work if you can't spell....

I know moving it down didn't mean moving it DOWN, I meant tilting a little.

If a guy had a block of 6061 and a Bridgeport this could get interesting. We dont have to stay with a single hole T body. A 2 hole like used on LT1 or L98 could be wider but lower, as long as the tps sends the right signal and flows the right cfm. Hmmmm

Would tilting the TB be the alternative to lowering the X-member?


I was never told about having to lower the X-member, until a few days ago... I didn't know that was part of the plan. I'm kind of upset about it.... maybe I'm making a bigger deal out of it than it is.

Every system is limited by its weakest link. If you haven't seen a TB mounted up to the LS intake, you are wasting your time talking about angling the TB down with a wedge style adapter because the Plastic from the intake will still be too tall. You can however plane down the alloy on the TB at an angle there and get more hood clearance, which is what I did.
Now if you have a blow mold operation and can make an Intake that had a lower profile....let's talk.