Hey gents . . . It's been a while since I have posted anything but have been lurking. I have been problem free since dealing with the pilot bearing and drive shaft issues in '08 so I have had very little to add to the vast knowledge on this board.

Just as a bit of background, my car is an '86 turbo. When I swapped in the LS I put a set of Superlites on the front with the help of one of the board members who made the adapters. I used the stock rotors, which as you all know are small. I chose to go this route because the pads were 50% larger than the stock pads and I had several sets of '86 spindles that I had been stockpiling. The stopping power was very very good, but I went through 2 to 3 sets of rotors a season depending on the number of events that I attended. OE rotors are 200/pr for the least expensive available.

Last year I did some bodywork and installed Broadfoot Racing's kit, which allowed me to run 18x10 rims with 295s all around. I knew I would be converting the front end to the late offset eventually.

My main nemesis during track events is a well driven GT3/Cup car. I usually don't have much problem on the power and handling areas, but the braking is like night and day.

In the beginning of this season I went through my last set of spindles so I started my quest for the "right" brake upgrade. I found a guy on one of the Porsche boards that had installed the 6 piston GT3 calipers on his '88 951 and that was all she wrote.

I contacted Doug Arnao at VCI brakes who had done one such upgrade, but used custom hats and rotors which are very expensive. So after reading some more, I learned that the 350x34mm rotor used by the 996 GT3 was exactly the same as the rotor used on the Cayennes, Q7s and Touregs with the big brakes. Cost varies from 100/pr (yes per pair) to 300/pr for the high end slotted and drilled rotors. I sent Doug a rotor and a caliper and he mocked up a bracket and the first ones will be here next week. You can use the '88 951 master cylinder because the piston area of the 6 piston is not much more than the 4 piston units (3877mm vs 3475mm).

In converting to the late offset I used a set of Highstrung A-Arms which some of the local 944 racers are using. No experience yet, but the racers have been using them for a couple of years now and I haven't heard any complaints.

White area is the Superlite pad on top of GT3 pad. 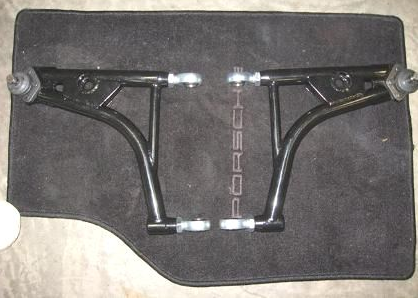 What is the swept area of the 350mm rotor?

Awesome work Marc! I don't know if it's just me but the images aren't showing.

That sounds like a great upgrade, especially considering the cost of replacement rotors. Would you mind confirming this list?

I'm running big reds on the front now, with Kokeln hats and 993 TT rings. I'm just now shopping for rings and would rather not use the OEM vented because they crack and develop ridges quickly...anyway VCI can have slotted made up, but they are in the range of $300 ea and the Giro discs (I think that's the brand) is over $400 ea.

So, if there's an option that offers more swept area and lower running costs...great. Do you know off hand how much those calipers weigh?

Hey Marc,
How the heck are ya? We have some racing coming up at Barber and VIR. If it fits your schedule come out and see us. The racing in a couple of our classes is out of control. Typically 6 to 8 guys with in a second at the flag. I have a new gig and handle all the tech side of things for the series. i'd be happy to comp you some passes. Hope all is well.

Great to hear from you and that things are going well. Please let me know when you all will be at VIR so I can try to get down. You will not recognize Clayton . . . amazing how time flys. I'm not getting notice of posts for some reason, so shoot an email to marcesq@verizon.net.

Dan J wrote:That sounds like a great upgrade, especially considering the cost of replacement rotors. Would you mind confirming this list?

I'm running big reds on the front now, with Kokeln hats and 993 TT rings. I'm just now shopping for rings and would rather not use the OEM vented because they crack and develop ridges quickly...anyway VCI can have slotted made up, but they are in the range of $300 ea and the Giro discs (I think that's the brand) is over $400 ea.

So, if there's an option that offers more swept area and lower running costs...great. Do you know off hand how much those calipers weigh?

Go with the Cayenne/Q7 rotors as the hole in the middle of the rotor is different for the Toureg.

I also went with 65mm studs which Doug also provided.

Make sure you get a right one and a left one.

Use an '87 disc to drill the two hole in the Cayenne rotor for installing on '87 hub otherwise the rotor will sag on the studs and not be centered.

Not sure what is going on with the pictures as I can see them.

Here is the finished product.

the pictures arent working because you're linking attachments to another forum. Is there anyway you can rehost them? I'd love to see this setup.

Schuepbach wrote:the pictures arent working because you're linking attachments to another forum. Is there anyway you can rehost them? I'd love to see this setup.

Any idea how I can do it? It's strange because I can see the pictures whether I am logged in or not . . . go figure.

here ya go, this looks amazing

Does anyone have a source for these calipers?

Had to update this thread after last weekend at VIR. I was going to install the reinforcement plate a couple of months ago, but after looking at everything I decided that there had to be an easier way to accomplish this task ala Rob's turnbuckle. I made a steel plate that bolted on the end of the master and to that was welded a suspension bung. A 5/8" tie rod with monoball ends was connected to the bung and bolted to the strut tower. The tie rod is almost a straight line from the master to the tower so the support to the fire wall is about as strong as possible.

Anyway, the difference in pedal feel between last season and last weekend was unbelievable. I'm on 15 day old Cayenne rotors ($70 each) and Pagid RS 29 pads that came with the calipers. VIR has two long straights, the front being slightly shorter than the rear. The front straight ends with a pretty tight right hander so full braking is required. After shaking the cob webs off on Friday I got into some pretty good dog fights on Saturday and Sunday. On the average I was hitting 150 to 155 before hitting the brakes at the #3 of 5 markers. Although there were a couple of Vettes and a couple of new GT3 RS that got by on the straight none of them out braked me so I was right back on them going into turn 1.

The amazing thing is that there was never any fade during the entire weekend. I just kept pounding them and they kept stopping.

I know that the calipers are a bit pricey, but I can't imagine a better brake conversion for our cars.

Here is a picture of the brace.