All the wiring complete, lots of small issues getting it going but it sounds great and seems to be running strong. Didn't barf any fluids on initial startup (my irrational fear during all these months of work) and sounds great.

We'll do some tuning over the weekend on the dyno. Will report back with numbers.

I haven't driven the car yet, but based on the way it sounds and feels (nearly solid motor mounts, solid transmission mount help transmit the rumble to the seat of the pants) it should be ridiculous, if not downright scary.

that is great man. sounds good. 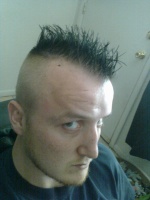 Seems the helper is always scared to mash the peddle when your filming!

That does sound good. How did you do the exhaust and what type of muffler did you use?

Congrats! It never gets old hearing the V8 note out of a 944.

Nice work Dan. That's what most poor souls hear as you leave them behind.

Thanks very much guys. It's been a long road.

There are still a few issues to work through and sort out. No doubt there will be some things that come up once I start driving it as well.

I'll post photos of the exhaust later. I'm using the modified S&P headers. We needed to shorten the passenger side header by a couple inches because it dumps straight down and there wasn't enough clearance with the ground. Other than that, the exhaust consists of 2.5" dual pipes all the way back. There's a small H pipe, followed by flex joints, then cats, then dual Magnaflow straight thru mufflers. We're only using the front o2 sensors. It's reasonably quiet at idle and not too lumpy. It rips above 3k and we haven't yet explored above about 4k.

The shop I'm working with for the tune - Tom Wong's - has at least a dozen LS7 motors sitting around in various states of assembly. We're already talking about heads and intakes...although my checkbook is going to need a break for a while before any more excess. As we worked yesterday there were about 10 skeptical guys standing around the car with arms crossed, just watching. They were Tom's customers, mostly Corvette, Camaro and street rod guys. By the time we had it running they were all grinning, animated and lot less skeptical of the little foreign car...and I would not be at all surprised if at least one of them was on Craig's list searching for a roller 944 last night!

Again, thanks for the encouragement, advice, information and support guys.
Dan.

Great looking car. Glad to see its running. Just out of curiosity about how long did the swap take from taking the old engine out to the state it is in now?

Thanks. It's really just a 5 footer. The paint is pretty weak on the roof and rear quarters (did someone drive it through juniper bushes on the way back and forth to work every day for some period of time...how else do you scratch paint like that?) and it has some rattle can respray on the front passenger corner. It looks ok for a track car and I've focused on getting it running.

I started in April. Chipped away at it all this time, although many weeks went by without even touching it. During that whole time there were very few opportunities to work on it for a whole day at a time. Mostly an hour or evening here and there, so it moved at a slow pace. Also, scope creep was a HUGE factor. I ended up completely replacing the tranny, suspension, brakes and did some work on the motor too. There was some body work and even time on a frame jig to put the chassis right.

Oh, and I've put it behind me now, but I was part of the parts 944 conversion supply debacle that happened with many on this forum during spring & summer. That chewed into the budget and timframe - not to mention it cost me some momentum.

Oh, and I got the car as a roller. It is a non-sunroof coupe chassis that I bought from a 944 spec racer who wanted the 2.7 motor and tranny.

I haven't driven it yet, so we're not quite done.

Similar topics
» Who is Victoria ???